Another way in which Gekidoll feels wrong (in a good way) is in how it portrays technology. Our modern fear of technology is deeply influenced by apple. We see technology as shiny and bright metal, vivid black. It's clean, in its broadest sense, and wireless. IoT, introduced in 2008-09, is so pervasive we don't even register it. In a world where we no longer perceive by what we are connected by, where interent is this magical ether like thing that brings people together, gekidol gives you rooms full of cables, with cold lights coming from the monitors, and blue-green lights. 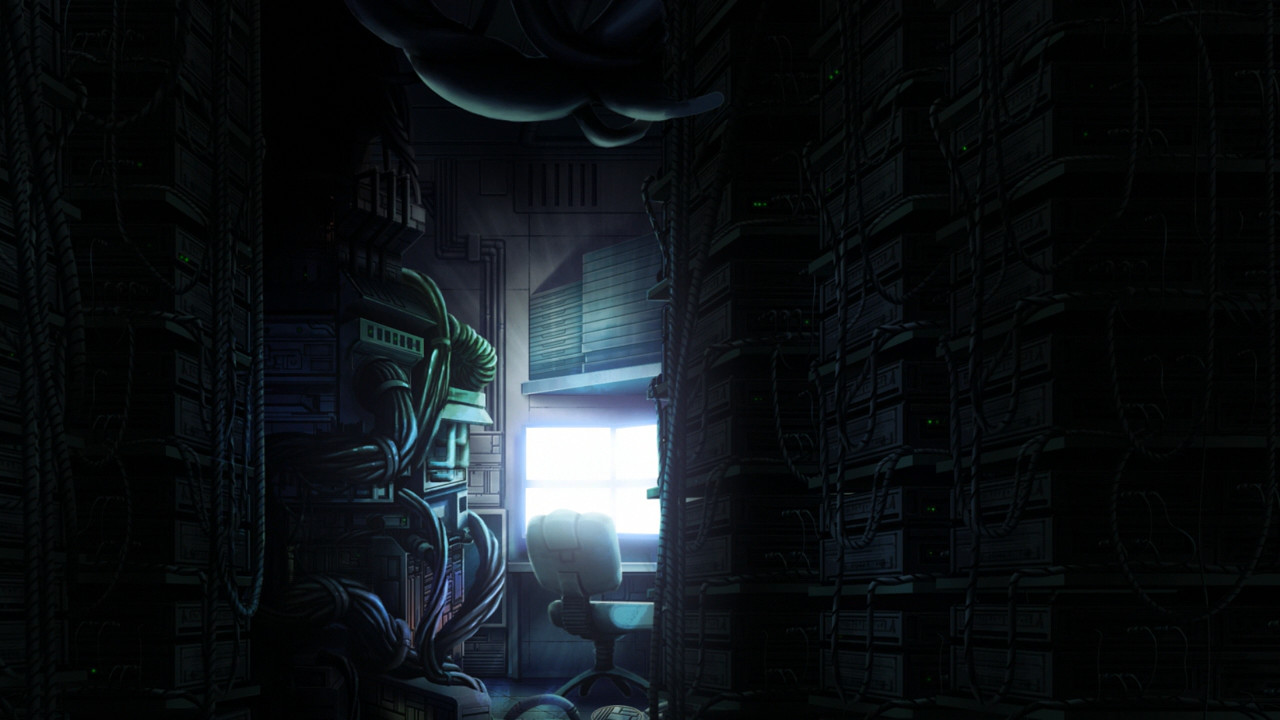 The integration of the human and the mechanical, the cyborg, is another interesting topic here. Again, cables are extremely important here. The show focuses a lot on them and here this idea is at its peak: they are literally muscles connecting and keeping the structure together. And this muscles are not clean and robotic, they are flesh-y red. Her face is peeled off, looking fake and like plastic (it probably is). 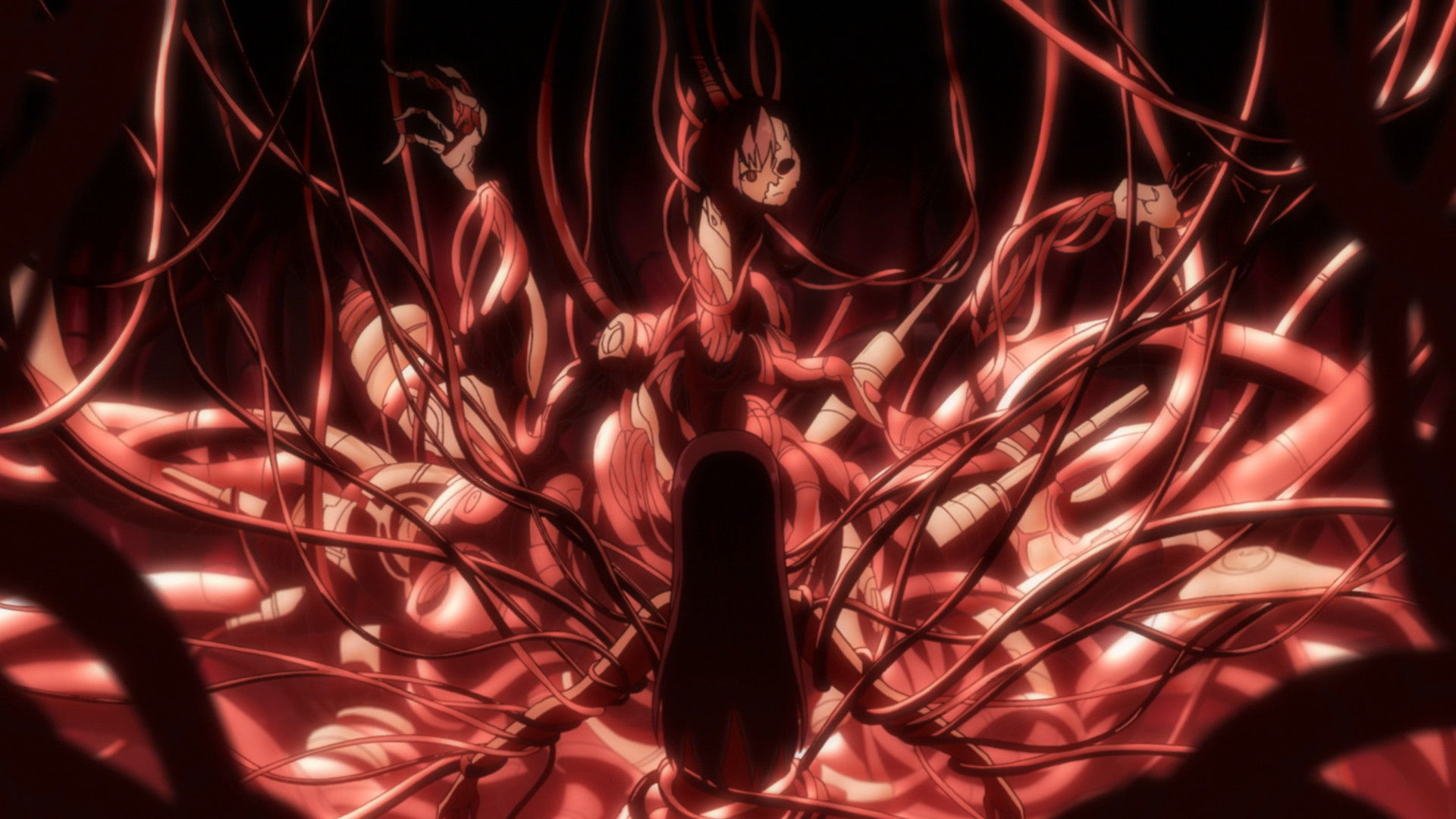 These nightmarish visions of the biological and the technological remind me of older products, like Lain and Tetsuo. They are not cyberpunk, they are what comes next. Cyberpunk had bright lights, even if they were fake. There was a fusion between man and machine, but the man was in charge. In Lain we had assimilation.
And here we see the key difference between Lain/Tetsuo and Gekidol. In Lain, the hardware was even more important. It physically united man and machine. In gekidol, this overlap is only in the software-brain-memory layer. We are presented with this contradiction then. "Hardware" is massively important, but it's only "software" that unites us. How do release this tension and provide an answer?
Probably the show is building up to the one of the greatest questions us humans can ask: What is that makes us who we are, the brain or the body?

Some words on Momoe.
Momoe as a narrative archetype is the mirror opposite of the "straight crossdresser" you can find in media aimed at girls (Yun from Yona is an example). They are the opposite, but they are the same in one spot, the point of reflection if you will. They both are a safe male figure for girls afraid of masculinity and males. This can be seen in the pictures she took with her fans, who treat her as a zoo pet, a curiosity. Compare that to how feminine she is in the picture with Haruka. This is reinforced by the colours, white bright lights vs warm and soft. 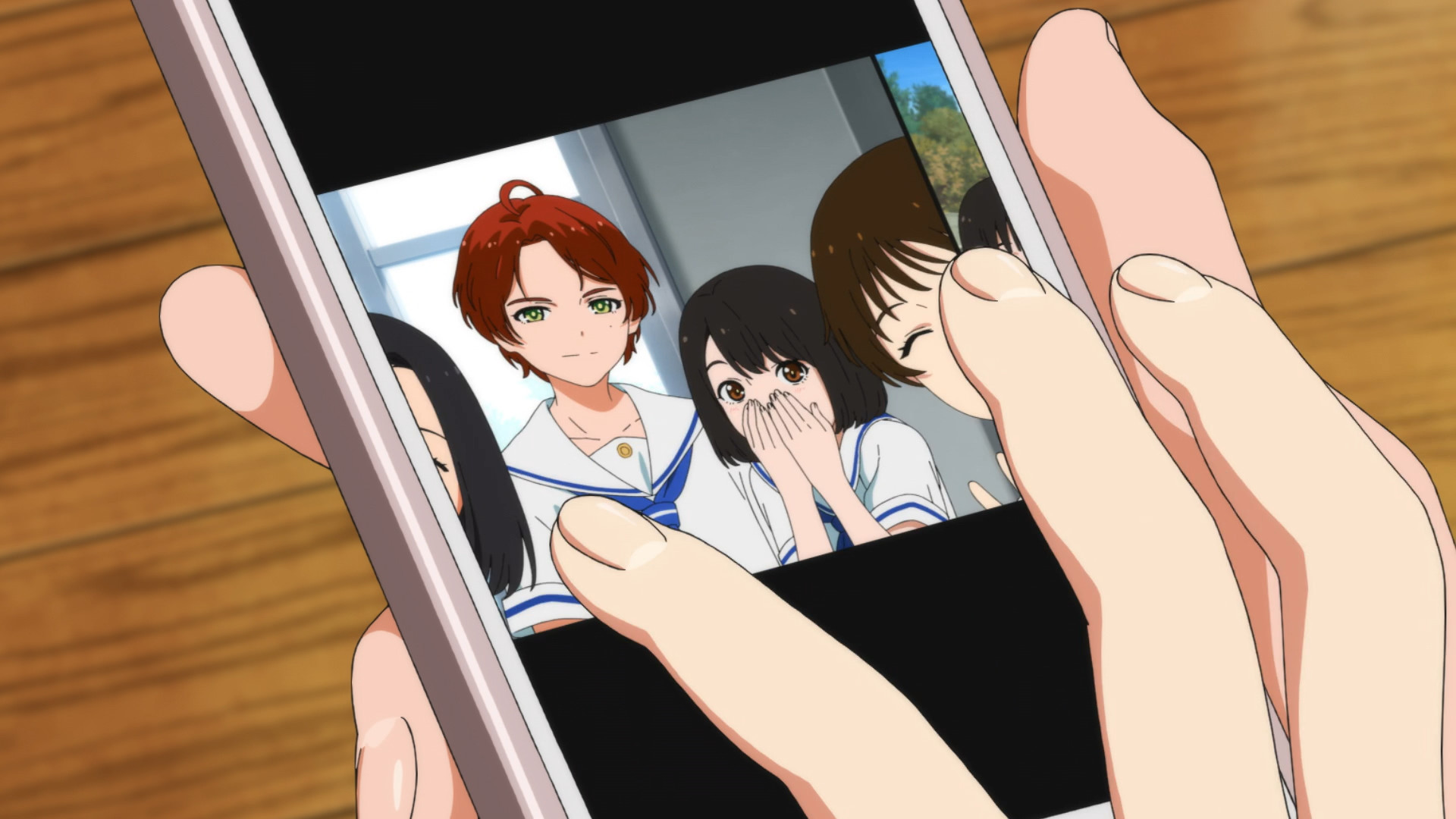 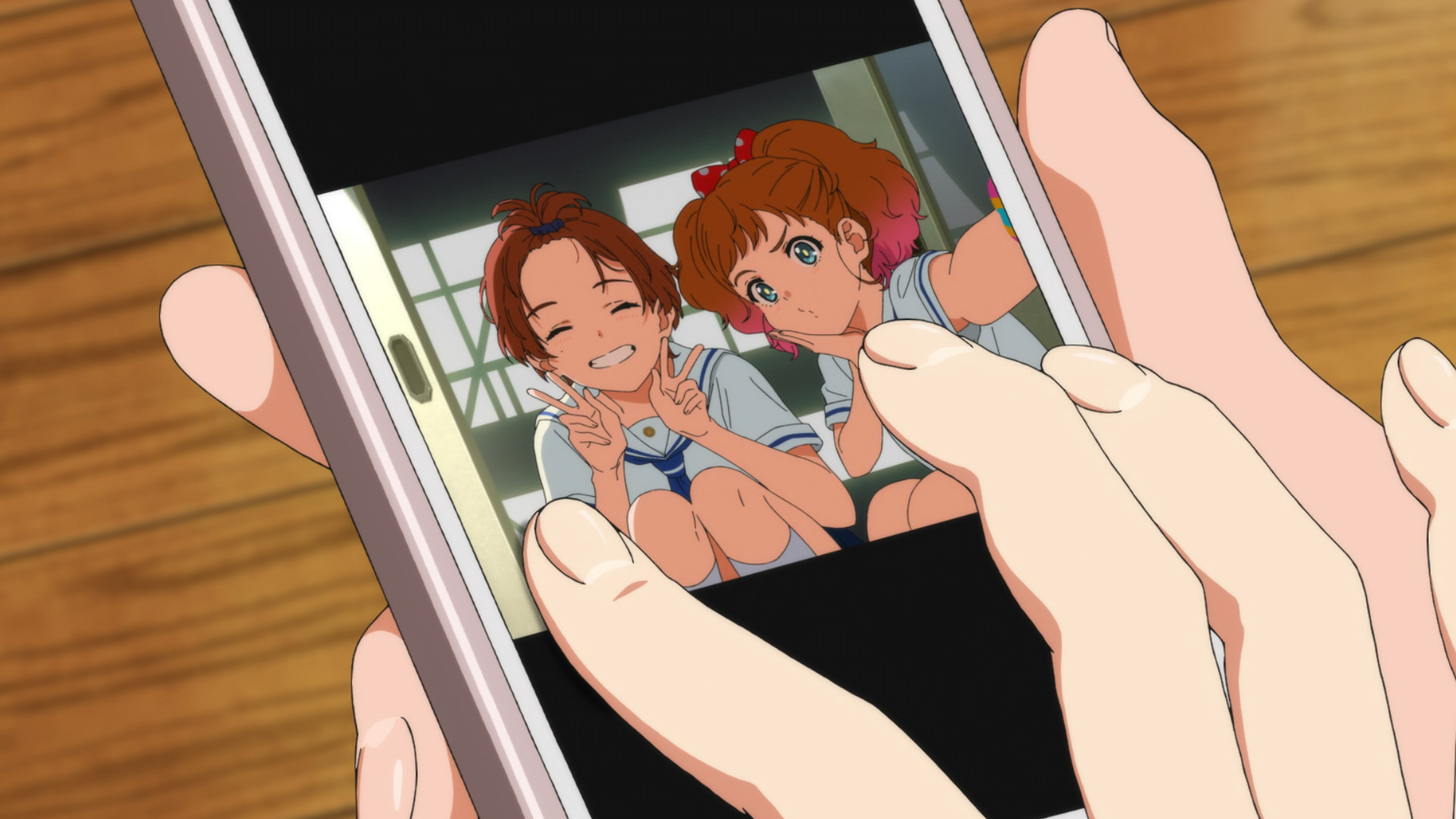 Now, the fact that Haruka sees her as a girl is important. Momoe was (and is) insecure about her looks. We saw it in her dream world (the first boss was the most explicit one). We saw her ask about how she looks to Ai and she's very happy when her mum immediately understands she's a girl. The talk about adam's apple is important because it gives her something concrete that separates her from boys.
Back to Haruka. Momoe could be free to be girly with her. When Haruka confessed to her, Momoe was broken and almost betrayed. Since girls like boys, and Haruka was a girl, Momoe understood that Haruka had always seen her as a boy. Momoe would have felt almost betrayed, let down. From this moment, she gave up on Momoe and became Momotaro, pretending to be happy with her role as the boy. It's worse than that. By now, she craves that attention, she seeks validation in her looks through a look she hates.
Of all the girls, Momoe seems to be the one with deepest and must entranched issues, and it will be a huge task to free herself.

While a lot of popular western/american movies and stories use alcoholism to depict the fall of a character, it's never that grim. Alcoholic Thor is presented as chubby and funny, a lot of other drinkers are shown as almost rugged cool. In Japanese media you often see older girls drinking a lot, and it's all fun and games, it's cute or mature. Kaworu is neither, her drinking is presented as cold and lacking humanity, it's the desperation of someone lonely. It's not showng with the extreme emotions, it's plain and calm. It's a crude reminder of functional alcoholics.

Also, as I said drinking depicts a fall. A cinematic fall. There was something big and relevant that went wrong and they started drinking heavily. It's not just a condition of being, it's a trasformation. Even when the character is a drinker at the start of the movie, we will see why it happened relatively soon. This drinking comes with physical modifications, like dirty clothes and unkempt hair, a strong smell.
Heavy drinking in popular media is a translation from the spirit/mind to the body. From this point of view, Kaworu is wrong from a western narrative perspective. 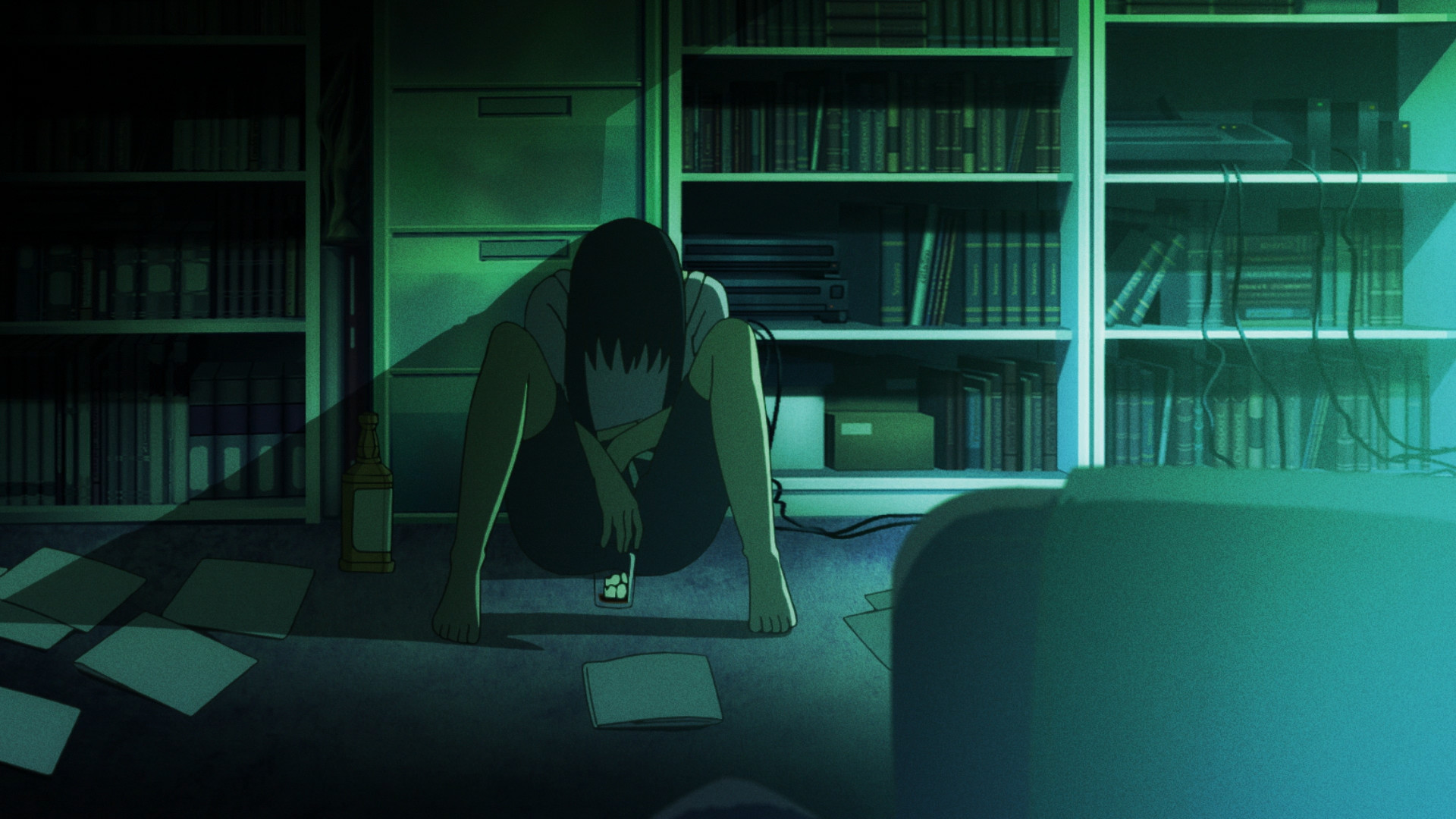 I've seen some people say that the monster in the second episode should have been silent, this would have made him more scary. Imho they are missing the point.
The real traum for the girl was not merely that the coach was beating her, it was the self guilt generated by the coach talking about loving her. It was about toxic love, and hurting yourself to make someone else haappy. It wasn't a critique of spokon mentality either, because that would be a society-wide issue and this anime deal with personal (ie between people in close relationships) issues.
Taking some terminology (but only that) from "the chrysanthemum and the sword", we can define three sources of trauma from abuse: authority (fear), peers (shame), and personal (guilt). Note that this is a distinction we make for the sake of explanation, in truth it's all shades and mixes. Minami is in the guilt sphere. She's abused by someone more powerful than her (fear), and she's feel shame for how she dresses, but the core trauma is the fact that she doesn't feel she's good enough, she feels like she doesn't deserve the love of the coach. This leads us to another character, Koito. We don't know much about Koito yet. We don't know what broke her, but so far we know that the abuse was of the peers variety: her fault was breaking the rules of the mob and being too close to a hot teacher.
This concludes to a question: what is the core of the trauma for Ai? her personal demons or the external demons? This question is important because it leads to two different answers to "how can Ai resolve her issues.

I was afraid this was going to be a safe and boring S2 without risks, but it's as good as the first season. I am glad I was wrong, they changed the focus point from "horse girls RUNNING" to "horse GIRLS running" to keep it interesting. There also seems to be an older generations inspiring new generation theme, at least in the first episode. Though the term generation is kinda fuzzy here.
The first episode had a nice momemnt between 11.35, where we see Teio eating a lot, and this frame around 13:00 where we see her cutting her hair. Knowing the narrative meaning of a girl cutting her hair, these two scenes compresses the identity of Teio as female lead in a sports anime. This is very good directing, because it sells an entire character in few scenes. Very cinematic, from this point of view. 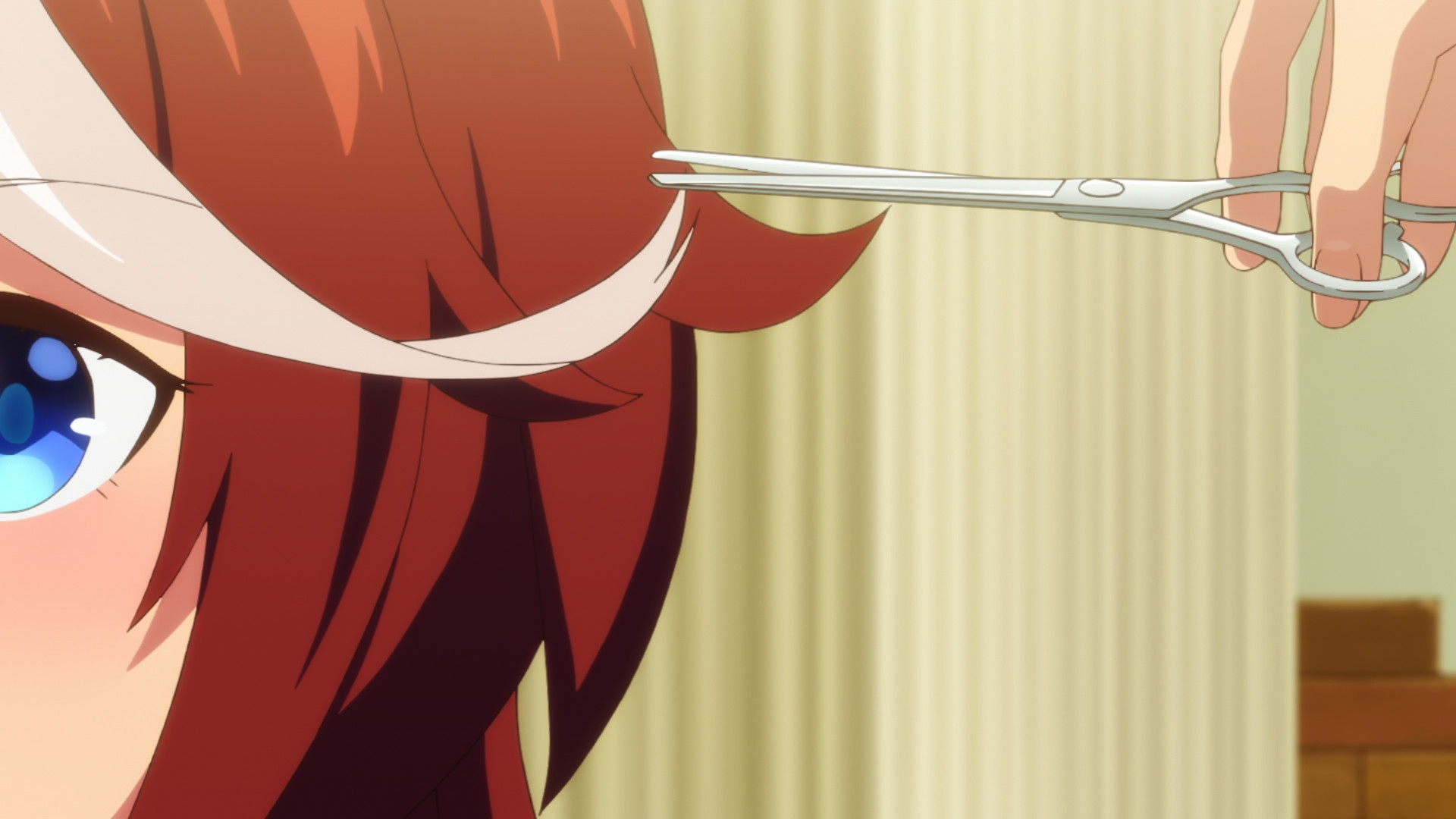 The second episode, similarly, had solid directing. The cars overtaking Teio running slowly because of her injury and mental state is cinema in its purest sense. The second image shows an understanding of the medium. A flat wall in animation looks like a painted screen, and not a wall. This is why they often show walls with angles, commonly 2 walls + the roof. Here, to create the 3d they use a column, which has the added benefict of acting as a framing device to highlight Teio. The director knows what he's doing, despite this being his second work. 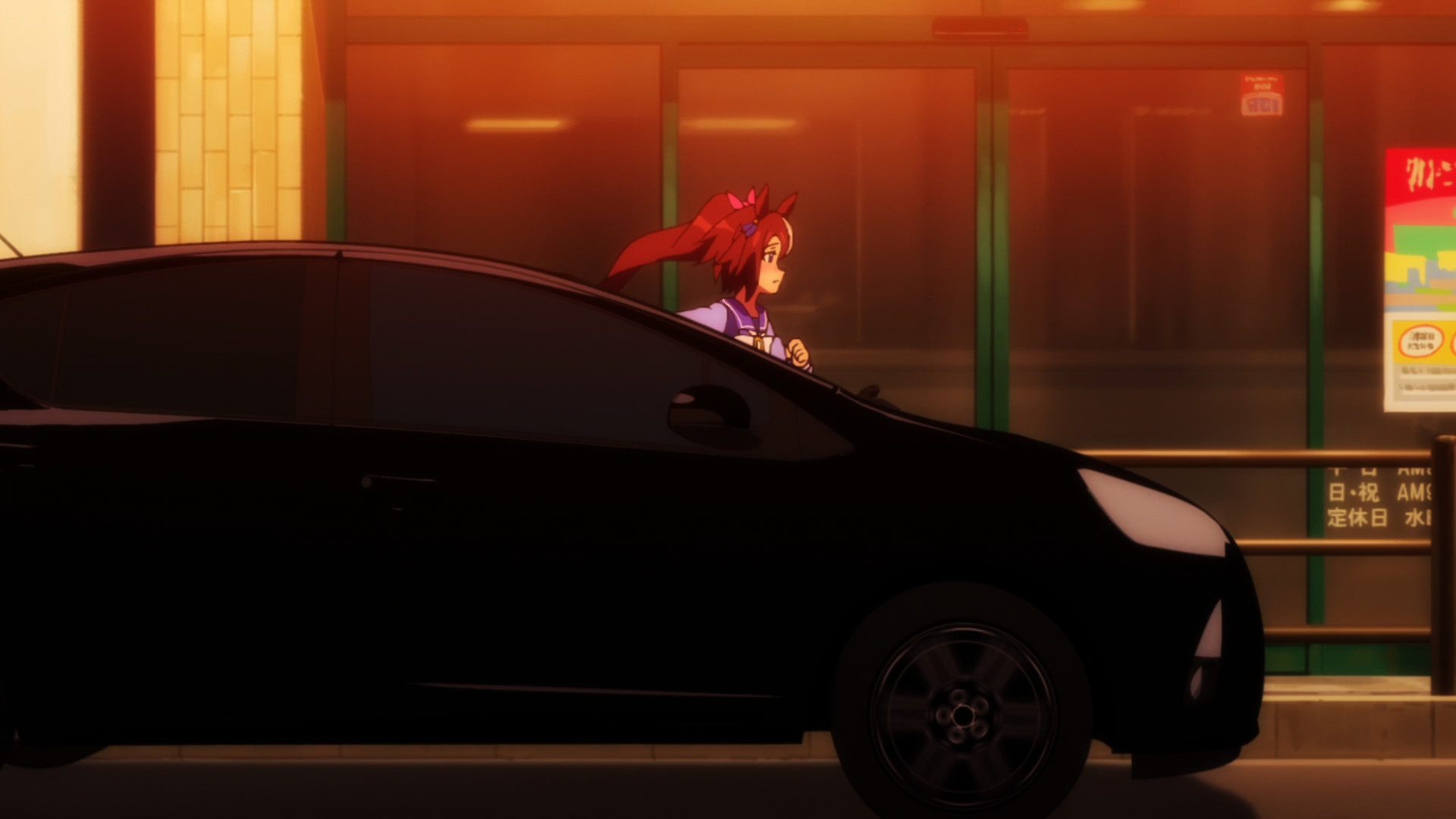 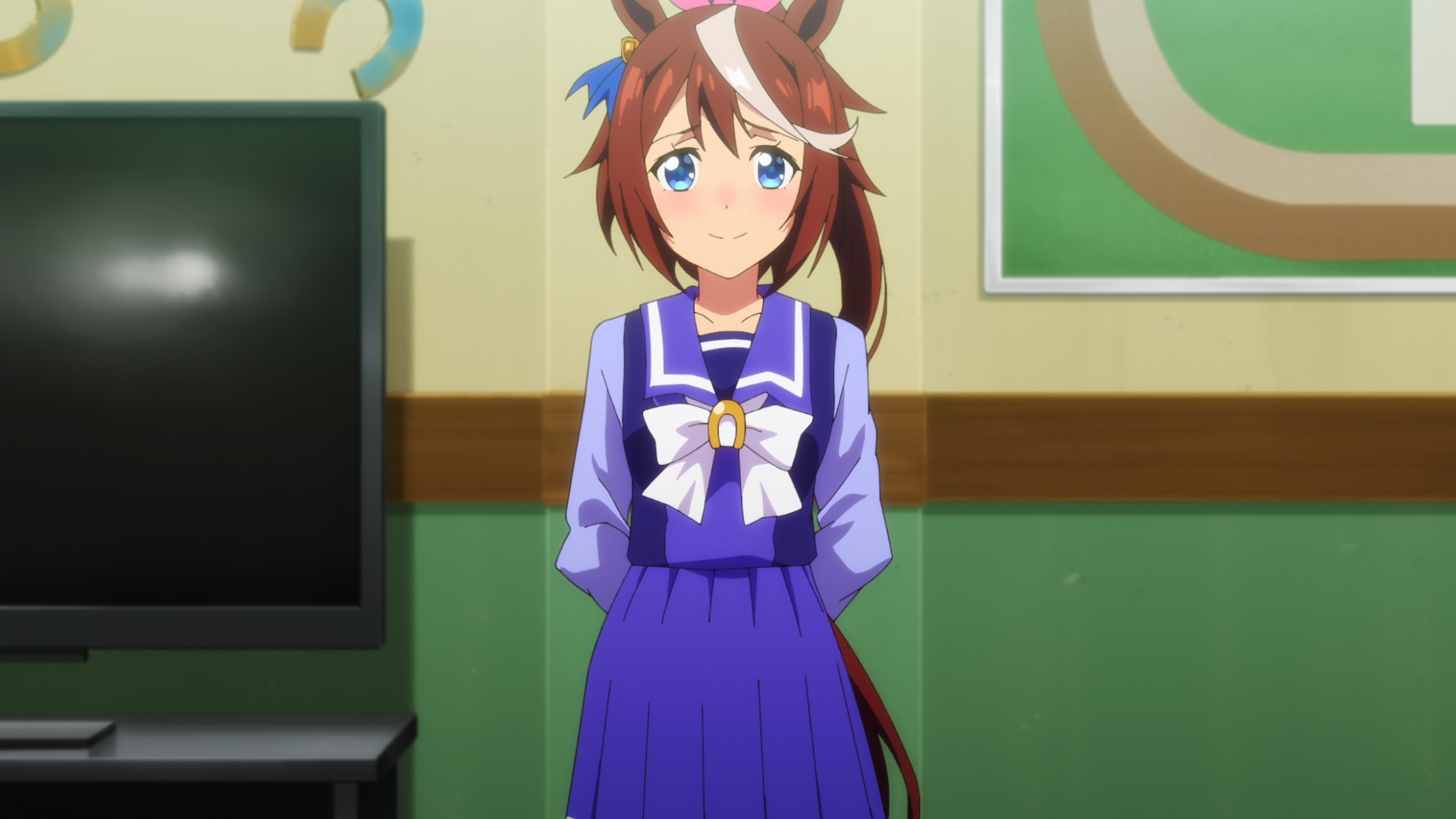 Teio's acting here reminds us of her insecurities, of her inferiority complex that expresses itself in her desire to be someone else. In this situation, she's afraid of bothering Suzuka, even if they waited until it was night in Japan/morning in the usa.
Her showing us her emotional insecurities here makes us understand that she has strong physical insecurities about her injury, despite the words up until now. Functionally, this is a break in the episode, and connects the change in the tone and mood.
Another thing to note is the difference between the side walls of Teio and Daiwa. Daiwa is more relaxed, with some cute elements and some cool things. Teio's wall speaks of her dedication, but is also the kinda wall a fanboy would have, a kid with a favourite player has. 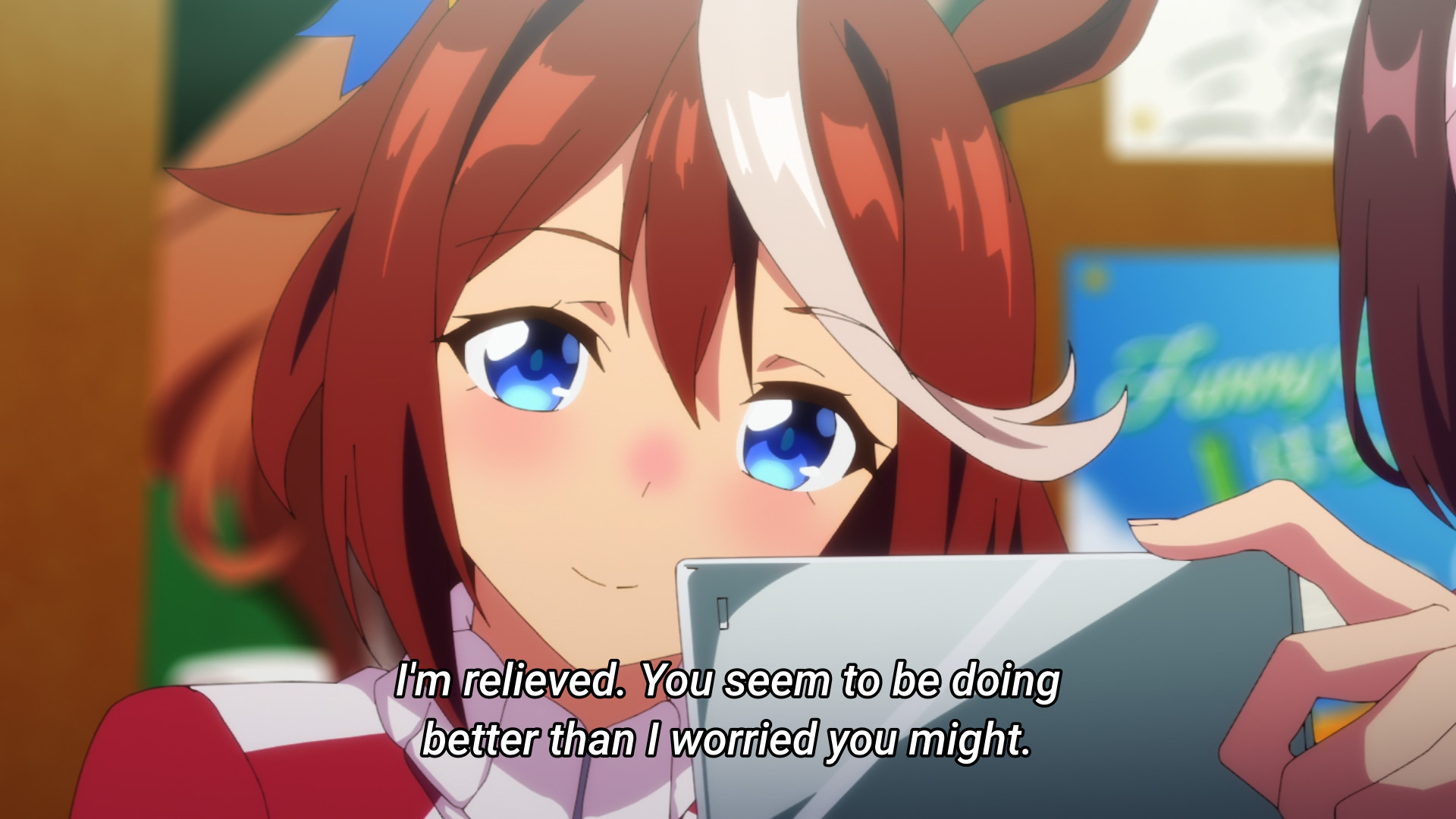 I was somewhat disappointed in Urasekai Picnic. I don't care about STALKER so I will ignore it. In any case, it fails at being as atmospheric as it should be. In particular the monsters are somewhat unimpressive - you can't have them defeated with salt like that. The second episode was better, but still won't be more than 6/10 if it goes like this.
Sk8 is the big disappointment of the season. I don't want to moan too much so I'll mention the biggest issue - the characters. In a race show like this you need characters that are likeable, with a catchy design that is memorable. Does it work here? no. Shadow is a parody without respect, Cherry Blossom should be the dualism of traditional japanese vs cyberpunk but fails at both, Joe is a big cook but he has a six pack. The biggest offender is probably the red head mc, who is too much of a "nice guy who could be a next door guy".

I expected a boring, gimmicky anime but instead it was funny and it made me laugh. I was surprised. Maybe 2021 got off to a good start. 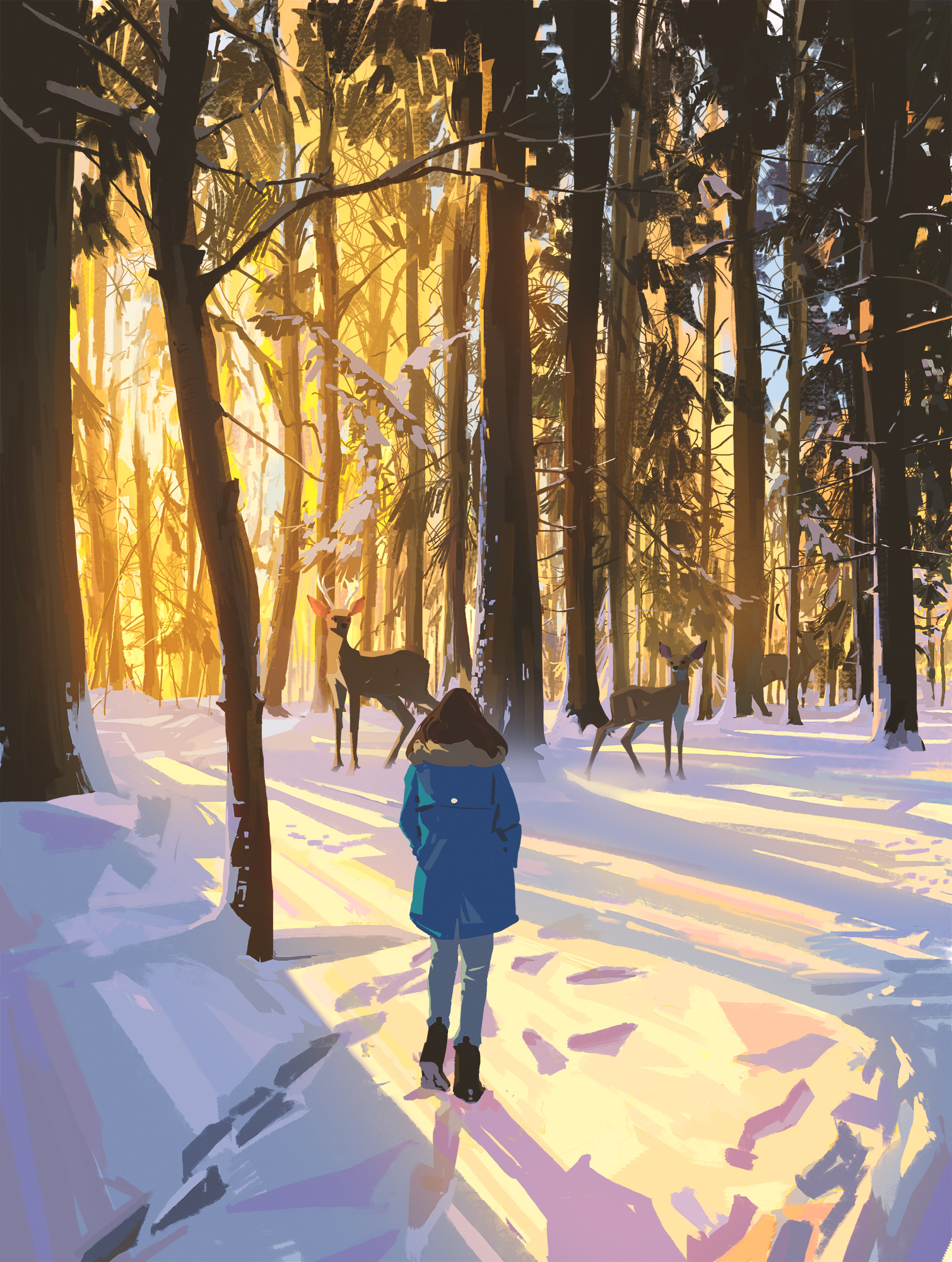