The shows has all teh right plot points of the genre, but it doesn't really work. I think the problem is the characters. Not jus the mc. The minor side characters, which should work with design + 2 lines per episode, are very flat. Nicole and Sakura, who are a bit more developed, are not developed enough.
I can't tell if the show wants to be a serious/straight idol anime and the wall is just a joke about higher powers, reminiscing of the italian movies Fantozzi where the big owner is this divine figure more than a real human being; or if it wants to be this creepy/meta story where you can't tell what is real and what is fiction.

A big positive are the visuals, like the previou episode. For example, here we see Nicole trapped, trying to leave the "vertical frames" she inside of, just for us to realize she is still "trapped" inside the lines on the floor. 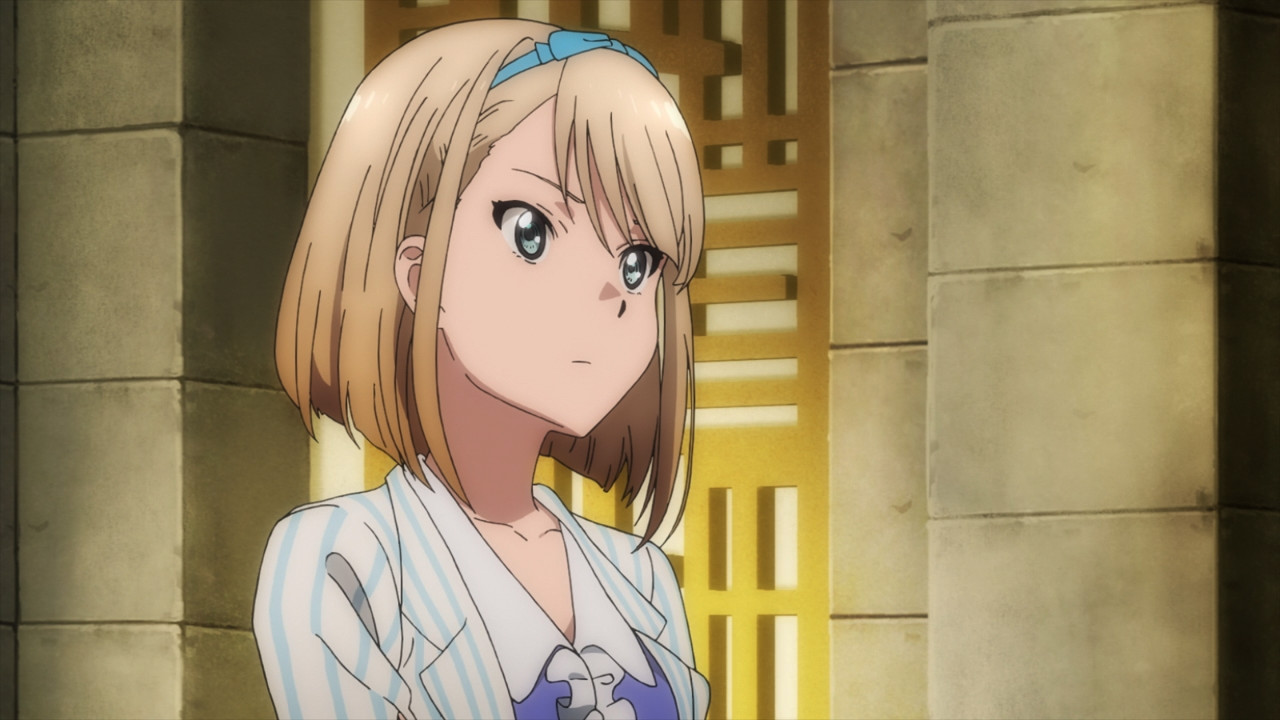 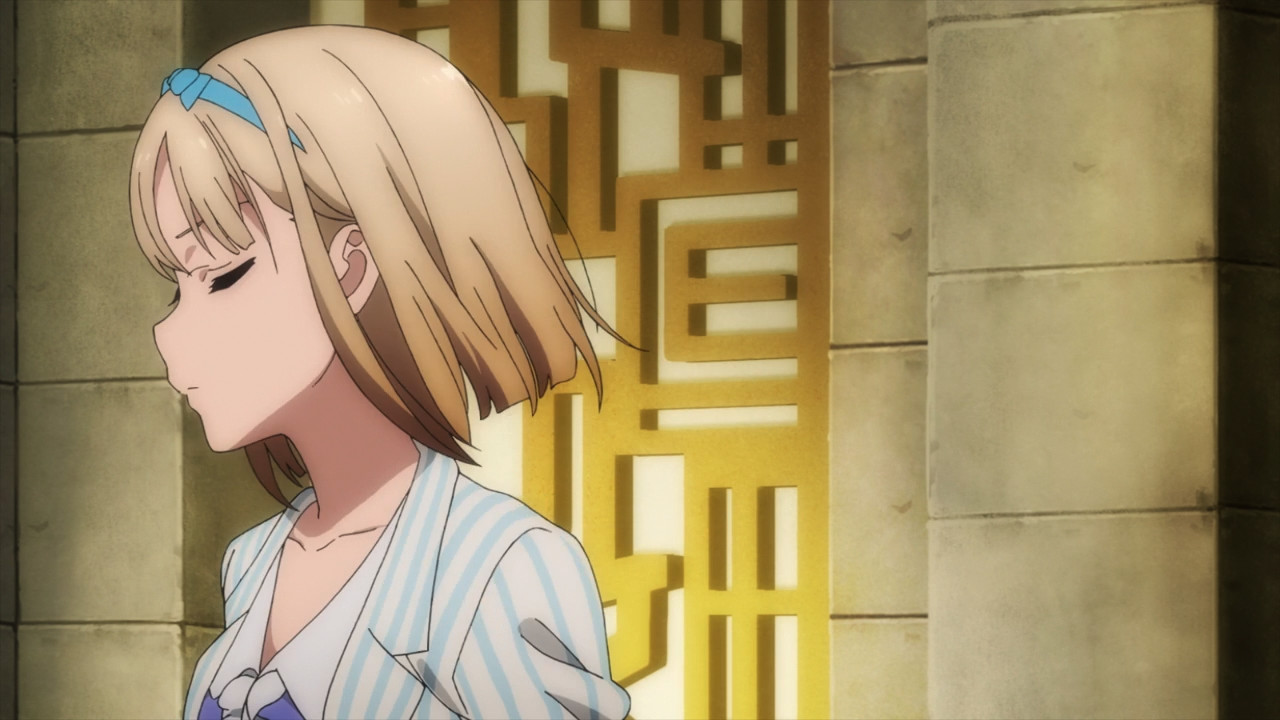 Ok, the stories are somewhat interesting even if they feel a lot like those lunch time tv shows my mother would watch. By the way, I know it's just a coincidence and with so many anime airing each season it happens, but I do like this sort of connections between shows (this and asteroid in this case) my brain can make sometimes. 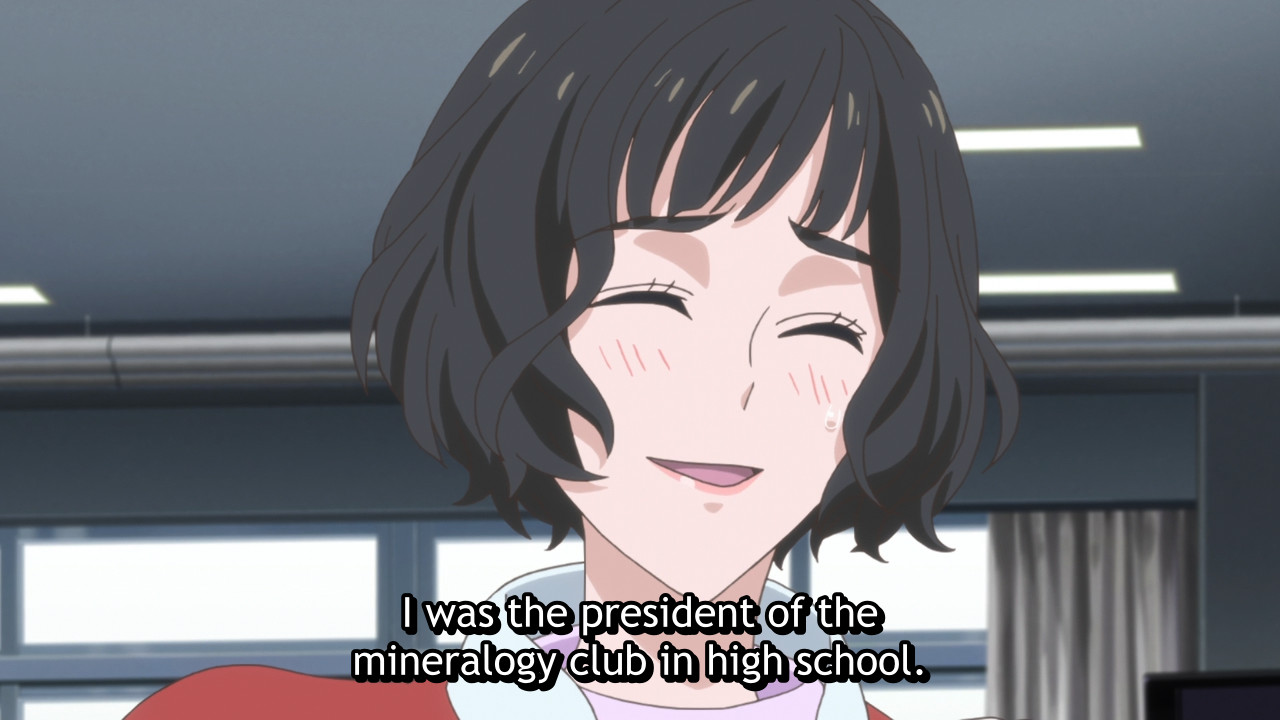 Runway de waratte is definitely not a masterpiece. Like, in 2020 do we really need to go through the "grumpy teacher with a golden heart" training? and this is ignoring the glaring idiocy of why the mc was sent there. The saving grace of the show is this small vein of hate and rancor through the anime.

Idols shows have been defined and perfected. We had parodies and meta stories. Doing something good is not enough, now you have to do something unique.
Cinderella girls took very seriously the construction of the world and cliques, side M was industrial absence of defects, ongaku shoujo was rough and primitive, revue starlight had the magnificient villain Nana was and the theatre elemnts. So, what does 22/7 give us? A divine wall that gives order humans have to follow. The idea is not bad. It recalls archetypes like ancient divinities with holy dancers/priests, with some hypercupe notes. There is also a strong rebirth idea, the ctonic rebirth after you are initiated to mysteries that leads to you knowing a new and different world. There is also a strong female element, with the male figures (the boss, and the producer) merely having a "order-follower" role. It's also a story of growth where being adult means doing things you don't like. Which, imho, is bullshit, but that's another story. 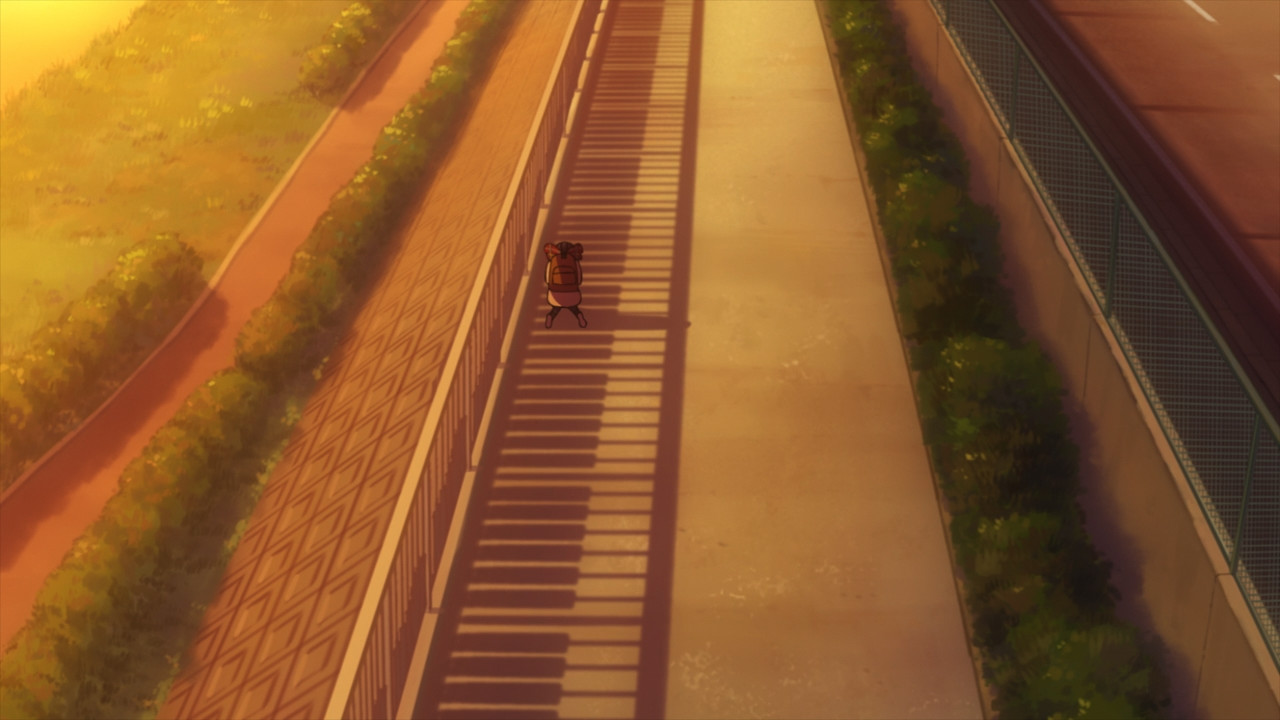 Now, where the anime suffer is, sadly, the main girl. I don't like her, the world around her is a bit silly (even if believable), and her va is amateurish and not in a good way.

It's not bad, it's just that it's so much a retelling of madoka so far. The visuals are the same, the theme that law, even in a divine and astral sense, does not accept ignorance as an excuse. I am not dropping it because I don't remember much about Madok and I want to have faith, but I have low expectations.

Maybe the best first episode of the season. It's a shame that, like many other tv shows, it wastes time on pointless scenes. The girl alreayd told us what happened to her. There is no need to show it to us again, and they should have used another way to introduce the idea that losing the eye and leg made her part divine.

It does what it wants to do, but I don't like it. For example, one of the first things that we should laugh at is the comparison between this young looking elf and the old woman, right? but an old prositute is not something we should laugh at. It's sad, in various ways depending on the context, but always sad. It's not funny. Or, to make another example, the harpy who sounds like a bird. It's way too much a real beast for my taste.

Oshibudo is fun, but it lacks somethig. A bit of hate for themselves, some mean spirit. That said, the scene with the idols walking through this mass of adorant, sweaty, ugly males is amazing. It brings home perfectly the ideal of the woman-goddess. The idol is something divine, that the urban proletariat worship in place of the old priestesses and spirits, left behind in the country side.
Our protagonist loves the idol of a love where she is annihilated, the love of a believer. The ending is amazing. 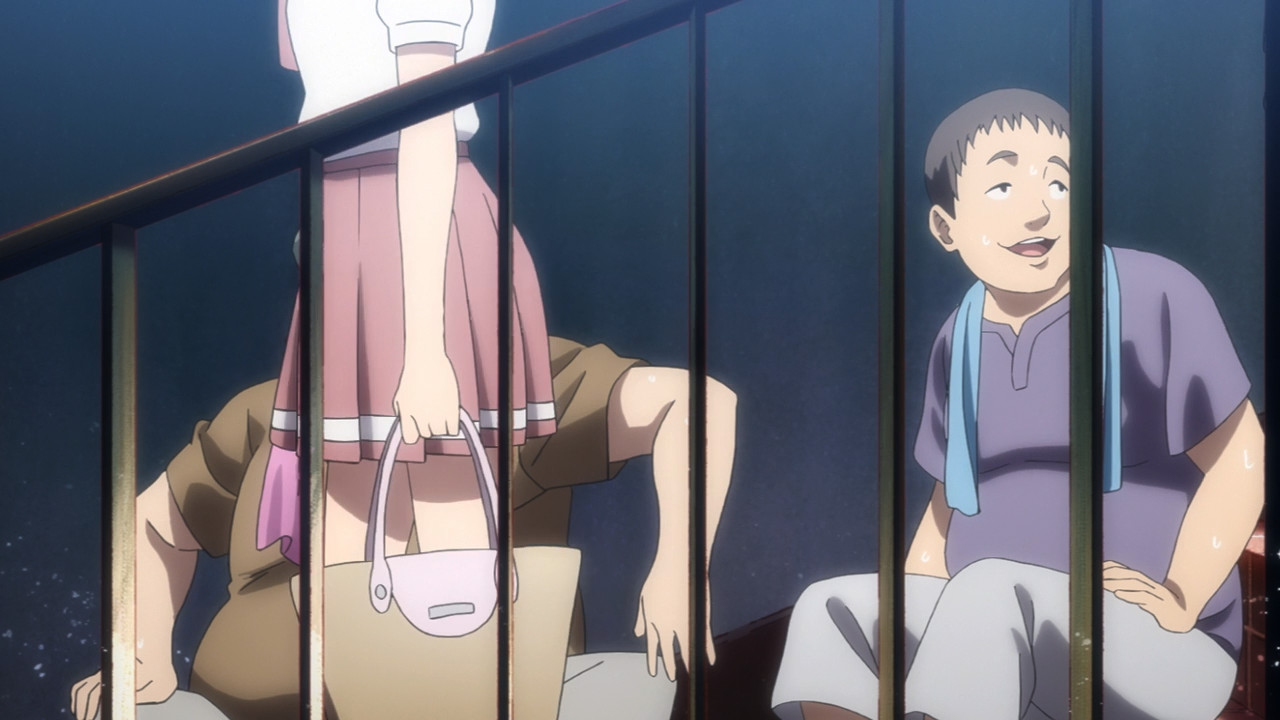 This composition is weird. Like, you have a couple of girls at the bottom, lonely girl and boy on the left and right, and then a couple of girls. It's a sort of a rhombus. A bit like the room is shaped, but not exactly. It's a very stable and solid composition, peaceful but nonetheless dynamic because of the slight shift compared to the lines of the room. This calm structure prepares us for the moment is the starting point for the breaking into Ao's room that happens later.
We are in for a very good anime. 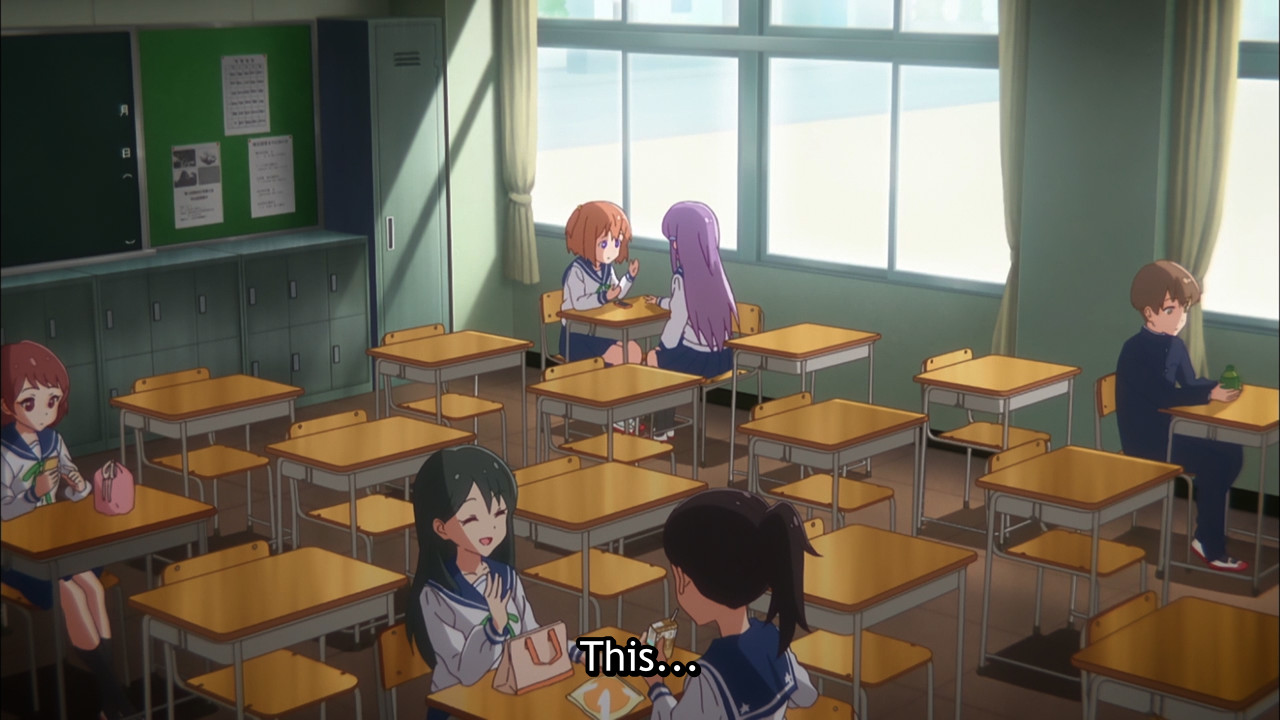