Awful. So we get a pointless kidnapping, functionally a deus ex machina so our girls can lose without losing. Even worse, they lose but they get the same chance as if they had won. So now they can pretend they are underdogs, flawed, whatever bullshit to make us root for them.

I was not completely impressed. Maybe it should have been a movie, shorter and more visceral.

I like to think I am not one of those crazy yuri shippers. But I have a hard time not thinking that they are using this training plot to talk about unrequited love and cheating. 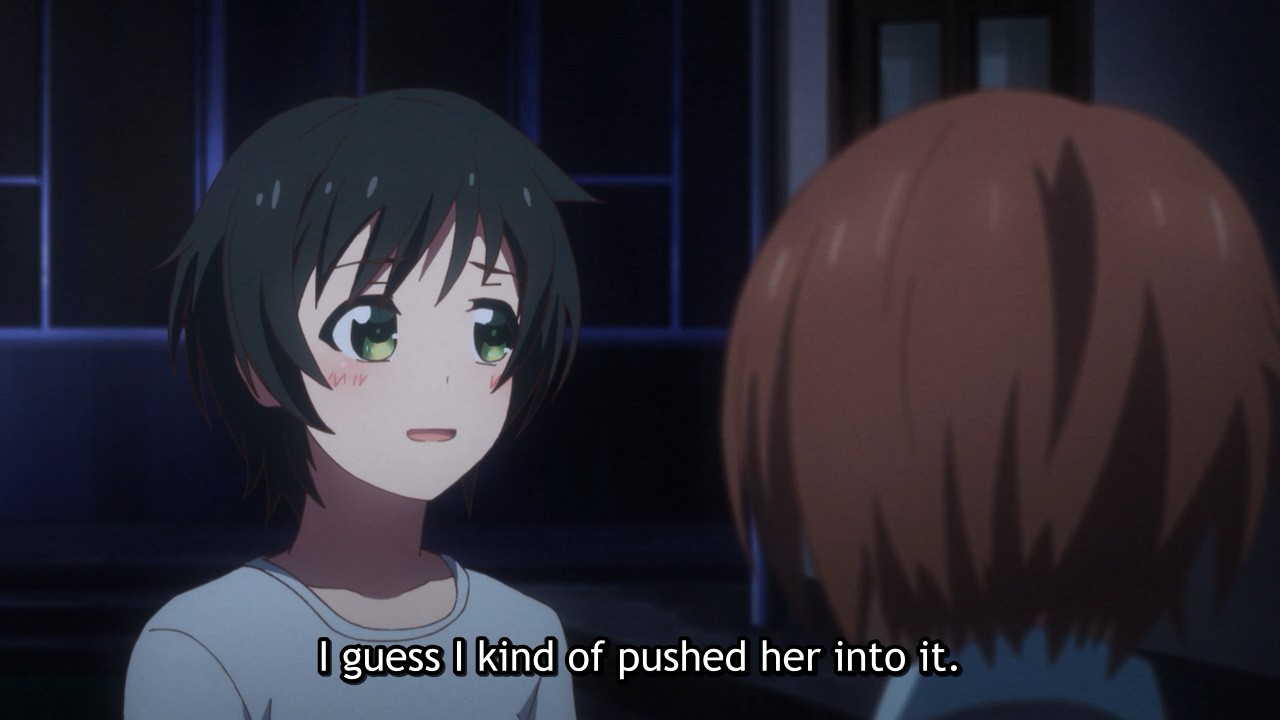 The first thing to say about this episode is the "villain", Kosaka Tsubaki (Blonde Twintails).
She's part of that group of female characters that are essentially divine/demonic entities coming from outside to ruin the peace and harmony. It's important to remember that, long story short, in a school anime the school IS the entire world and everything that exist outside is either not important or not human (see also: the beast or god phrase from Aristotle) . It's not a coincidence that her ribbons look like horns.
A similar character is Yumeko. If Yumeko is a chaotic entity opposed to the orderly creator god that is the president, what we have here instead is a group of humans.

We come to the second point. The team is at this point an organized entity, with a leader, with rules, and with roles. They are creating a language, even. They are a society. A society that is still pure and archaic, pre-historic.
The fight against the goddess is then a sort of rite of passage, from the age of gods to the age of men.

This leads us to the third point. In this structured society we have a leader and soldiers. We also have a group of intellectuals, who do not directly fight and who are under the leader but are tasked to help him in decision making. The creation of this intellectual caste is part of the formation of the new society, but it's a heavy burden for its members.
We are seeing the seeds of the creation of bureaucracy and all those people whose only job is to keep society running.

The thesis of this episode was that the state is institutionalised patriarchy and keeping women down, the antithesis was that you need the state to achieve your goals, the synthesis is the long march through the institutions.

Episode 9 has two issues. The first one is a waste of potential. The french singer could have been an antagonist in a movie about destructive and sick love. Or she could have been a judge, instead of a rival. Make her obsessed with Tuesday and promise for the duo to win, just out of love or lust. This creates more moral dilemma and makes the story more interesting.
Though the real issue is structural: the reality competition itself. People watch those to laugh at the contestants with the judges and to laugh at the judges. It's not interesting if it's not trash.
This show doesn't feel well thought, at least to me.

I decided to rewatch the first episodes, 1 to 5. They are structured in sort of arc. 1-4 deal with themes like the inherent sadness in growing up, while 5 is a breather episode between that and the social themes of the later episodes.
The first episode opens with a the shell of a cicada, the utsusemi. The utsusemi is later referenced in the same episode 6 minutes later, connecting the sport with the intro. 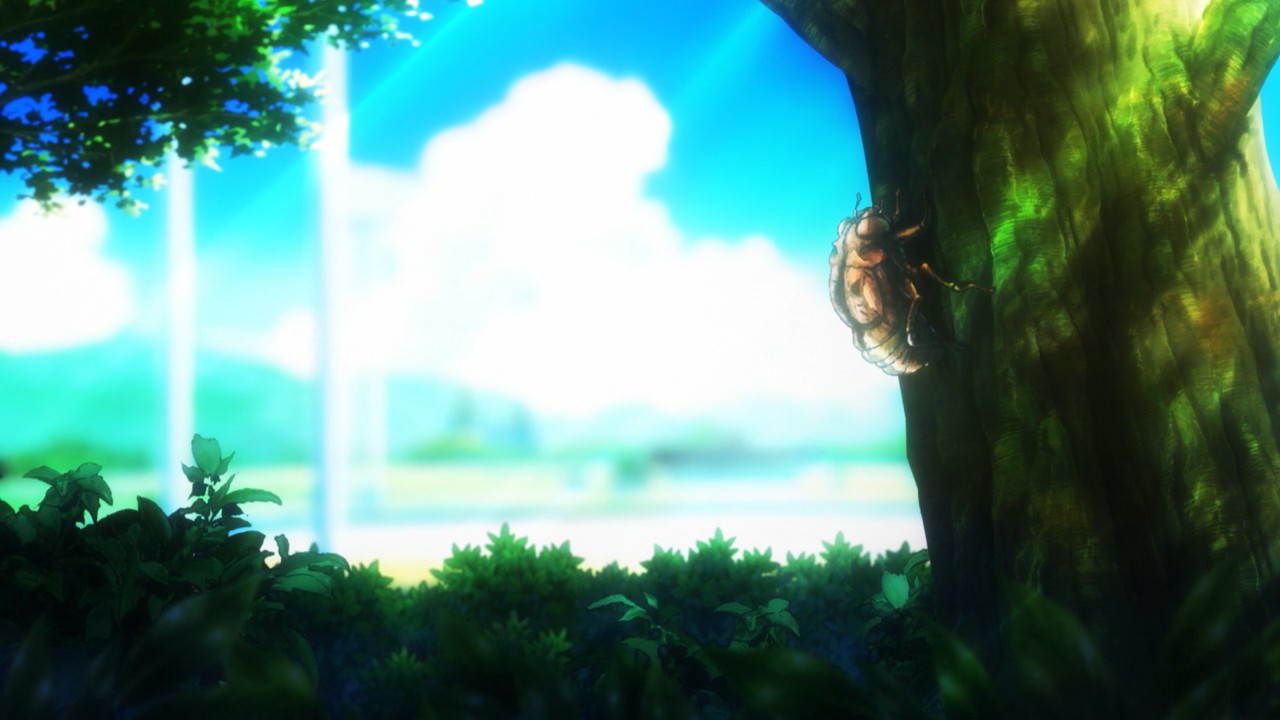 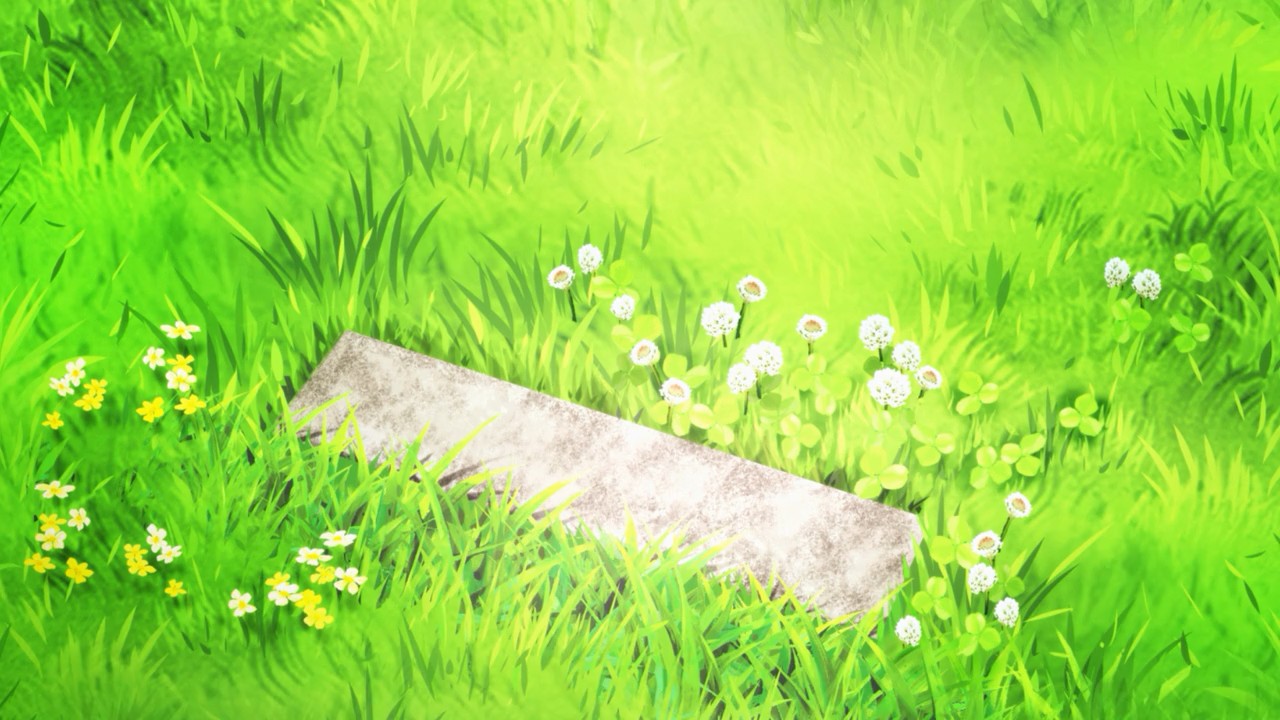 Beside the obvious meaning of summer, as all cicada, it is used to introduce the metamorphosis and, from the traditional japanese origin of the term ""people who live in the world" or "this ephemeral world". After this introduction, the first episode deals with changing, with two of the girls (Nozaki-san and the cat-hood girl) growing up and overcoming their fears. This will be repeated through the episodes, as it is the spring that moves the story - or, actually - the characters. There can be no story in a real sports anime, since sport is an art form based on geometry and not on linguistic. All there is, is human life concentrated in a smaller scale, it's us viewers that create the story. Now, of course, this is not a real sport, it's a sport anime, so there is a story, there is a plot and there all those things that compose a linguistic and a visual art. But plenty of this story is presented through the sport, an example being the girl overcoming her fear of balls. And this story does not exist, it's created in our minds and eyes. The authors know this and use this sort of meta narrative. This is difference between a sports anime, like this one that understands the substance of the sport, and the plethora of titles that just use the form of the sport, and in truth are merely action manga for young boys, with super powers and all that.
Episode two is more somber. It starts by showing us places filled with people, highlightining how alone the girls are in the sea of faceless men. The only people our girls know are connected to the world of baseball.
Episode three is connected to the loneliness again. The two new characters are two typical characters from japanese cinema. The first is the delinquent, the yankee, the classic good figure that works outside the rigid and strict japanese society. The second one is the female gambler, a figure associated with criminals and outlaws, like the red peony gambler. The gambler is similar to the delinquent in the sense that they work outside the rules, but in a different fashion. If the yankee is the intentional decision, the man fighting against the gods, the gambler is closer to a log going with the water, but outside the world, divine and demonic. A good example is kakegurui, with Yumeko being a literal tempting demon.
The third episode also introduce an enemy from the past, bringing back the idea of this sadness related to changing and leaving things behind.
The fourth episode deals with the meaning of life. It compares two situations, opposite but with the same result. Regardless of if you win and succeed or if you can't win, life is eternally without satisfaction. The mc's struggle is the harder to grasp and the easier to translate in sport terms: the cosmic emptiness that awaits you when you win. 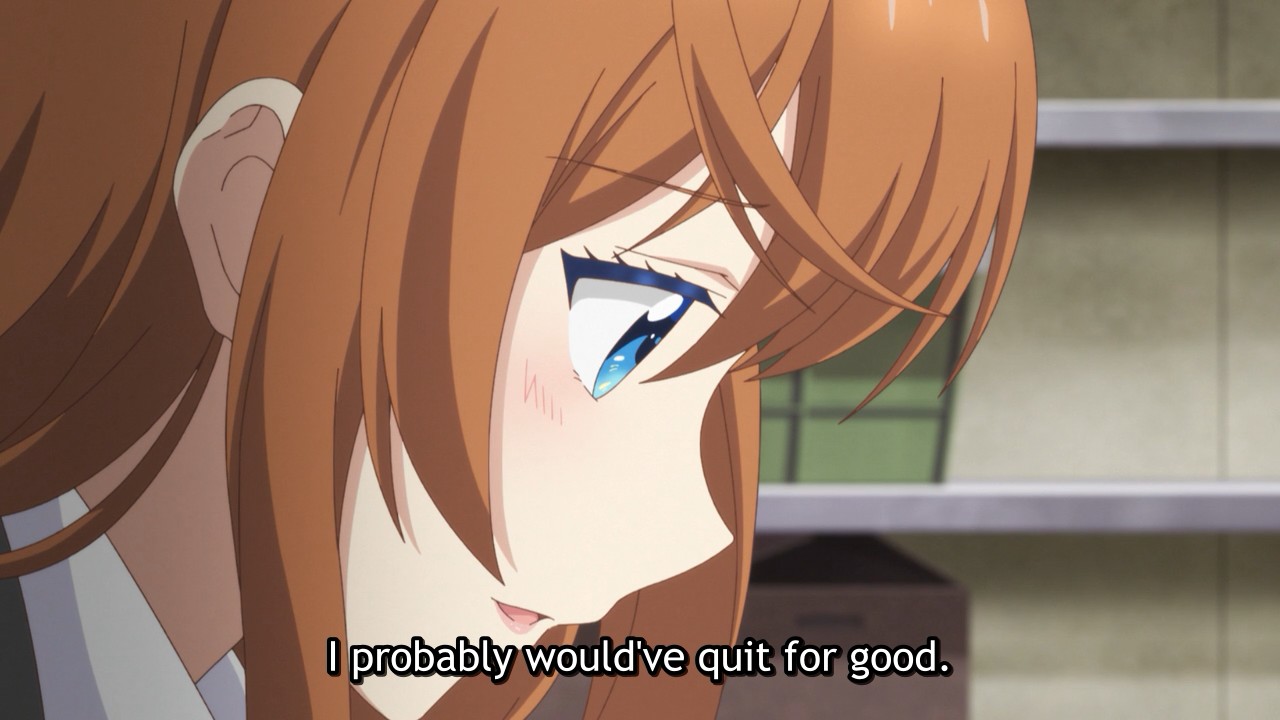 It is from here that come real problems like the fear of winning. On the other hand, the other girl's struggle is the more mundane, and it's about coming to terms to how good you are, and accepting your level. The big fish in a small pond but in a good way. Sort of at least, because like in episode 6 and 7 there is an aftertaste of sadness in what should be a good ending.

Episode 5 is at its core a cosmic horror, in the sense that it deals with things that are so alien, so outside of the limited world of our characters, that they are scary. As always, this is translated in the art form that is the sport. It is not a coincidence that this, ironically, starts with the introduction of the most mundane and girly thing possible - clothes. It goes even the extra mile and shows you the girls talking with someone outside their circle, to lull you into a sense of peace and positivity.

I am not sure if I like this or not. From a technical point of view, it's amazing. The thigh muscles on sensei leg in episode 1 is an amazing touch. It's not as gross as something as sensei ga. At the same time, it still lacks a freshness, irony, or something that makes it feel a little less sad.

The betrayal was never really believable, but the movie was otherwise good. We finally got something that is classic without feeling old. I am also glad that they lowered the violence, the recent movies were too gorey for my taste.

I admit I already forgot what happened in the previous episodes, but this was the first time where it felt like they understood of point of sports. They took a universal human struggle like what happens when you mix friendship and being serious and reduced it to a very visceral story that is very relatable. Was it perfect? no, but they tried.

This episode as well had good ideas, good shots, but failed to feel connected. I think they are not using well the fights, I am not sure.

Ignoring the politics themselves, I don't think it was a good idea to try to defend them via stupid 70s manga training with beatings and hard training. Ashita no Joe, 50 years ago, already showed how empty and dumb this sort of obsession with sports is.
By the way, I wonder if the wall guy being the best teacher is a reference to how playing alone against the wall is a good training for ball sports of if it's just a coincidence. 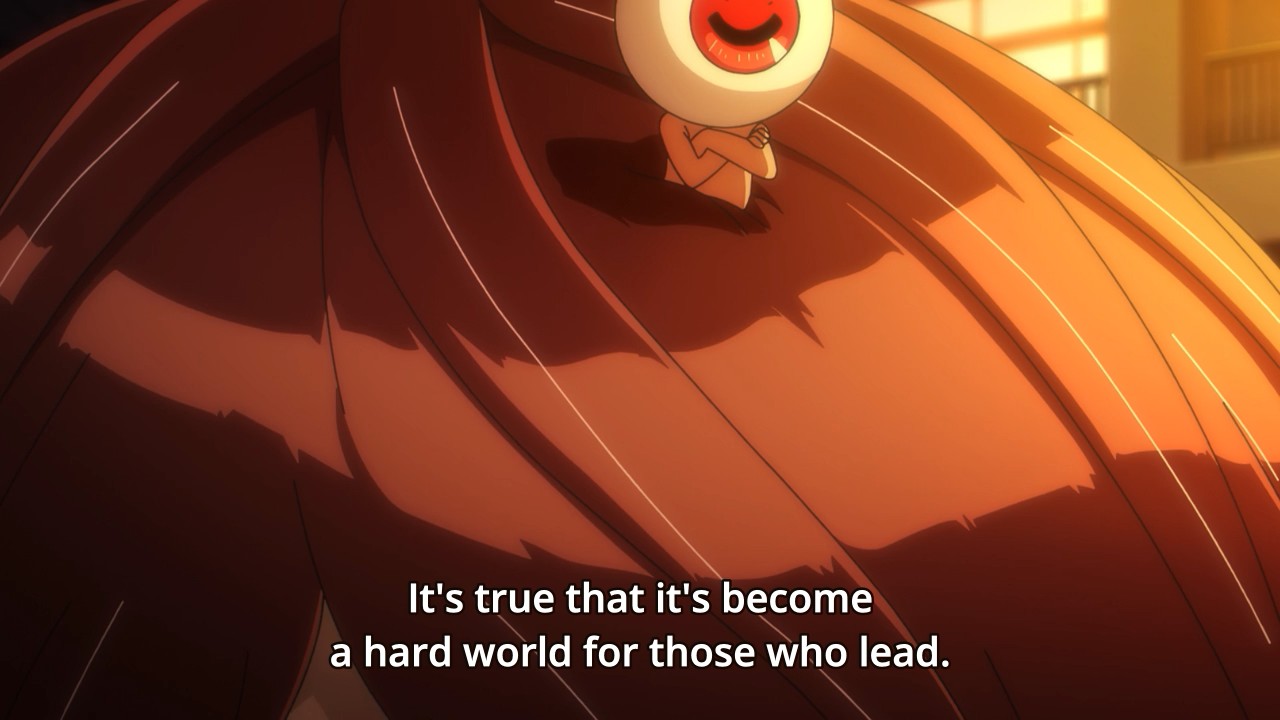 Eh I mean this episode tried to be something more, but it just couldn't match what it wanted to do. I'd say that it would have been better without the battle, to have some more minutes of screentime for the daily life, but then it wouldn't be precure. That, and Huggto managed to be a lot more in the same time. Kirakira episode 24 will not be surpassed anytime soon. 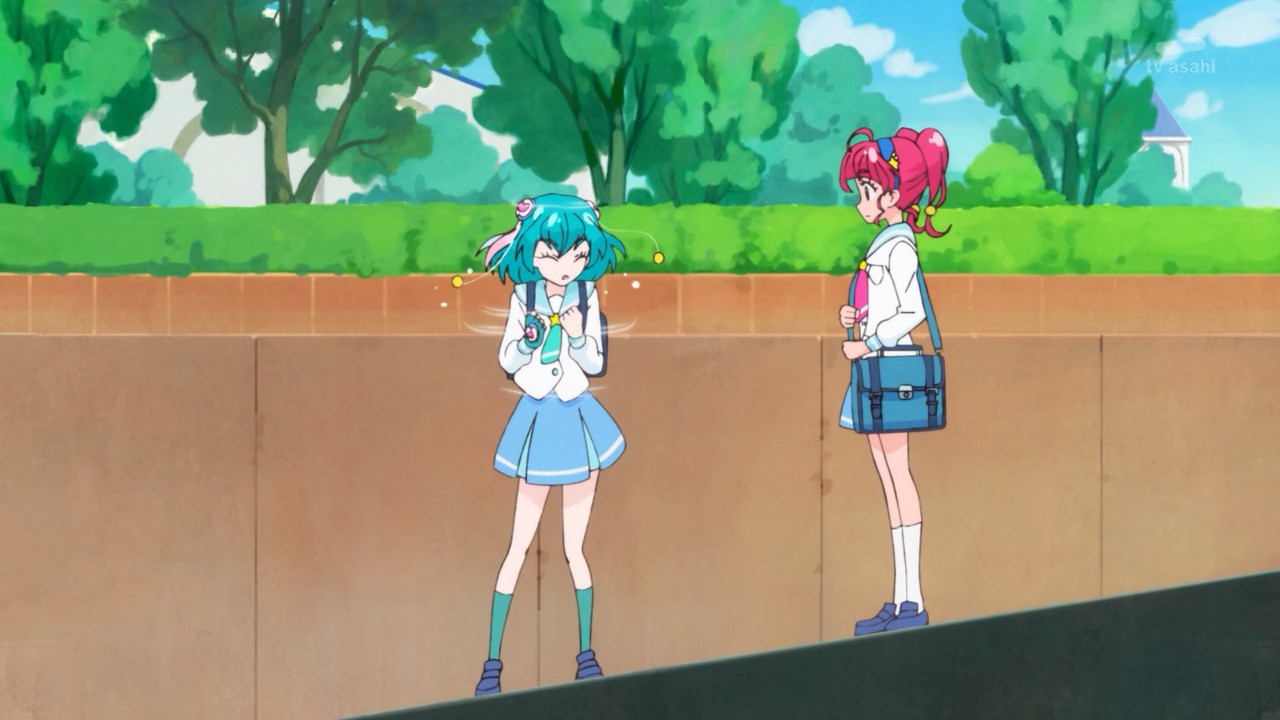 Not a fan of this episode tbh. I think that they wanted to do a "oh look how normal homosexual love is" but it came out clumsy. Bloom into you did that better with the two older girls, the teacher and her lover. Also, the fact that used the ed for the video instead of a new song was a wasted oppurtunity.
The video itself made sense given the premises, it's ok it came out bad, but it feels like wasted time for us as viewers.

I am happy this anime is over, in a good sense. After all the problems they had, they managed to finish it.
The point of the story was ok but what I really liked was the pervasive atmosphere of actually liking what you like, being happy that other people like it, etc.

I mean it's not bad, but it's quite boring. I don't really like the "music can change the world", I always thought it was a bit of a childish masturbation from artists. Lastly, there is something that rubbed me the wrong way. In the second episode, there is the silly scene with Tuesday cleaning and making a mess. It's funny, but her not just googling it ruins our image of an ultra technologial world. Something similar was a joke and a plot in the simpsons' episode where Homer works for Hank Scorpio, when Marge is bored because her ultra modern house can do everything for her.

The third episode was a bit too much, too many fucked up people. Also, I think the stock footage is getting too prevalent and we are only 3 episodes in.

Eh it's ok I guess, the manga is better.

The second episode was good, it made me understand just how completely fucked in the head the mc is. My problem with this anime is that all the butt stuff feels childish. Like I get that the point is that secrets are visceral and disgusting, but I don't get disgust from how the anime is done.