I am far from the biggest Hinako Note fan out there, I think it's a sloppy anime that feels more mashed together than written. This is one of the most touching things I have ever read, probably thanks to the broken english. This quote alone made watching Hinako Note worth it for me. 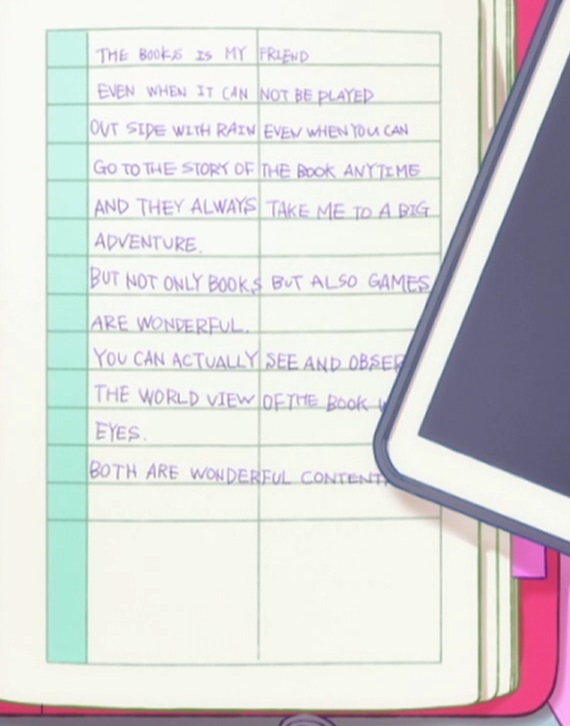 The episode started with a still image of a dead tree, zoom to the room with Japanese background music, and a traditional poem that ended with a joke. It's simple but it shows the comedy in this anime is more subtle and, frankly, better than the 99% of the comedy in anime, which involves violence, reference and silly faces.

Another smart scene here, a cheap solution to show us how fast the femc is. 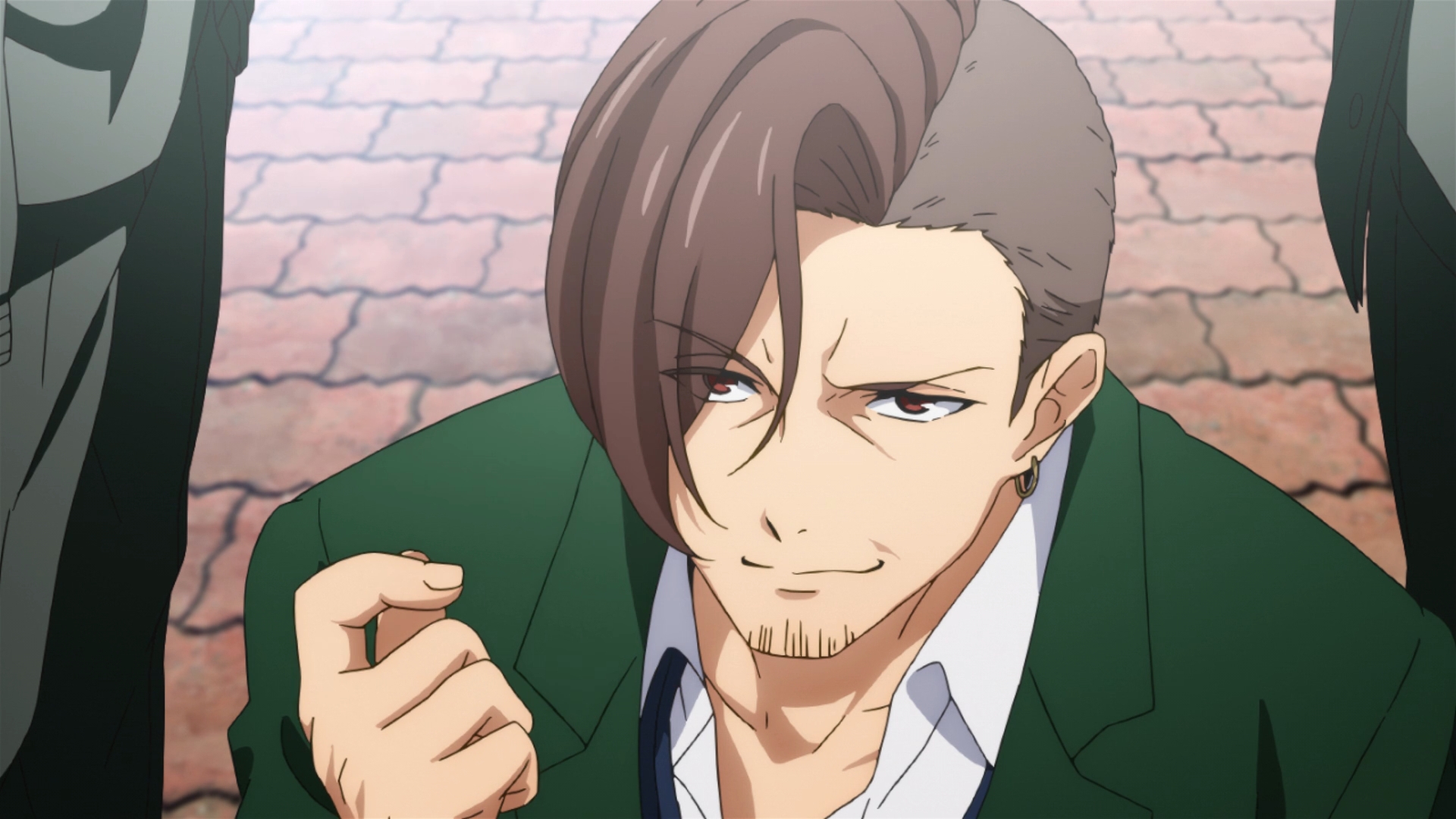 The first half had an experimental comedy sequence where we see a traditional aspect to aspect transition suddenly broke by Hres flying through. This was already surprising on its own, but the sequence was also built on a similar sequence at the start, making this sudden action even more unexpected. This was the definition of comedy, as in the difference between reality and expectations. The building on the first sequence also makes you realize that Hres went through the window because the door was already broken, letting you know what kind of girl she is. Another interesting scene was Gourai asking for money, not the first time the anime SHOWS you that the dolls are the one spending money and not Ao (you). This anime is movie-tier in this showing and not telling.

First thing first, I did not like the mother scene here either. I couldn't understand if it was supposed to be comedy (usually the female on male violence is used as comic relief) or if it is damn serious like it looked like from the content. I went to mal to check what else the author did, and I was a bit disappointed when I saw that people hate it.

I thought this was interesting until the mother call scene. I do not like this sort of mothers in shoujo anime, they always have a faity tale evil mother flavour that completely ruins my belief in the world depicted. In the context of star business I can accept it because I have a complete hate for parents for push their kids in show business, like they are top tier in my list of awful but legal things people do. In this context, I can accept a mother that calls a son to ask for money while acting like a cunt, but I do not like it. Generally speaking, mothers (and fathers) in idol anime are always a touchy subject for me.

Watching this, knowing the tomboy is going to get btfo hard is painful. It's not that Akane is sdoing anything bad really, it's just that CHinatsu is so much nicer that it hurts the main girl.

The blatant fanservice is starting to feel like desperation, "please watch our anime".

I do not like how the show seems to portray those who don't agree with the girls in a silly, almost strawman-cartoon, way. The scene with the blonde guy being taken away by the popo was fun though.

The first 3 episodes could have been a movie with how they were presented, I liked it. Fourth was fun as well.

I should have wrote somewhere what I wanted to write. Anyway, I remember that I really how the senpai were able to criticize something that they liked without coming off as some sort of tsundere. In general this anime writing is so simple but nice that I wish this was a live action, even a live action movie, because it deserves better than the low budget adaption it has.

The scene were Ao realizes the dolls stole money from her bank account was a not so subtle way to depict you realizing how much you actually spent on said dolls. This is bilt on the previous scene were Ao tells you she had to pay for Bukiko's food, actually telling you of someone paying for his (her) gf's dinner. The whole scene was there to build the Ao as your self insert.

This anymie is like an exercise of poverty, the director is seeing how far he can push low budget and abscence of animation to animate. Not that this excuses how bad the op is. I especially like how the scenes with them talking like they are interviewed look, they appear like a documentary after some shit happened. The story itself isn't even bad, there are all the things you look for in the genre of deliquent and female violence. There are some parody elements, but they never eat the genre. I also like the feMC, she very silly.

Man, this anime is so political it's not even funny, this episode was strongly against "toxic masculinity" and it didn't feel like it was only for comedy like sometimes otomen does. The depiction of women done by the reverse trap was enough to make watching this worth it.

I liked how magic was made less, well, magic, and explained. Reminded of when people compare programming to magic, just in the other direction. I think there is an opinion about nuclear energy, or at least this is what I got from his talk of magic being less useful that agricoltural science. The attack on school scene was a bit forced, though talking about it I realized that it makes sense and was actually well thought in the anime, so it's probably simply sujective. 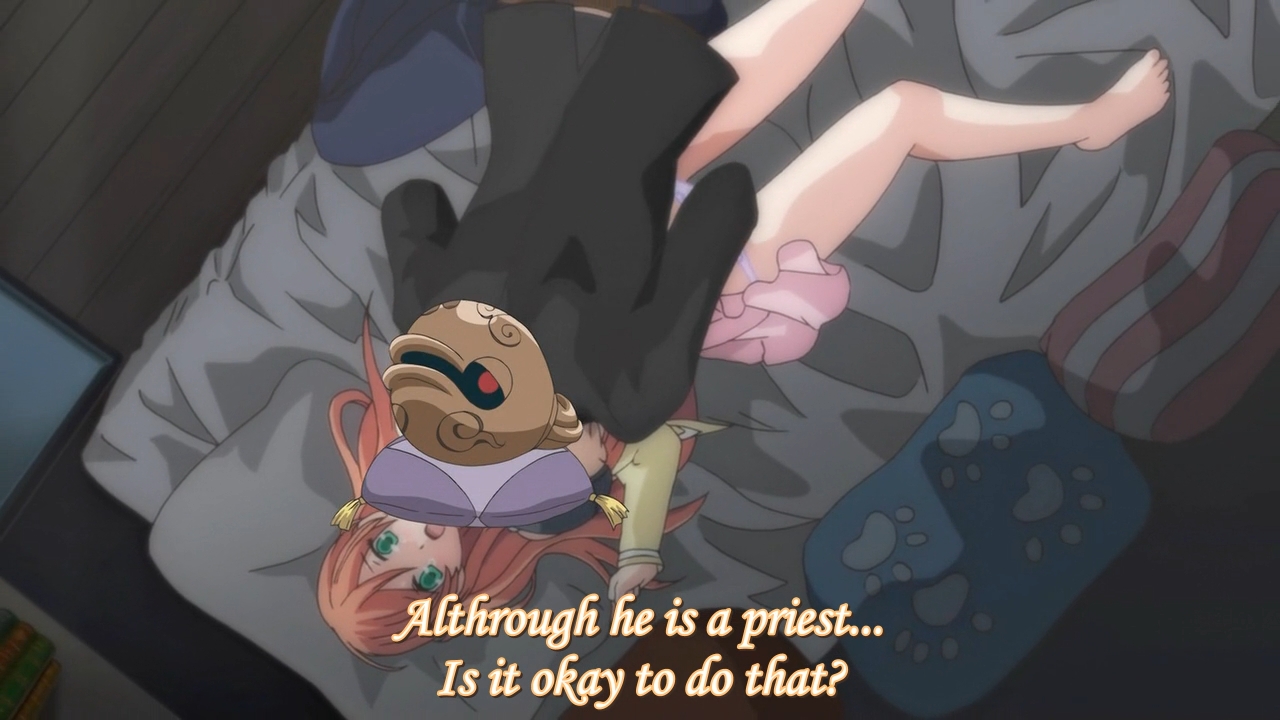 This episode was a lot like a yuri story aimed at girls, all we needed was a suicide. The princess, the cool prince, the two groups of loyal fans, said group hating our mc for being friend with the cool cat (and dog), it's not the usual cute fun yuri. An anon said something about the camerawork, "it would fit right in in yurihime", personally I noticed more how the facial acting of cat and dog was almost like real actors acting when compared to the silly faces of the other three precures. The jewels subplot is another thing that I felt was very "shoujo", it gave a value to jewels that you wouldn't see in something for guys.